Entry 3571 Why I Dislike My Adopted Home

When I left my real home in Western PA and drove across the US of A to get to Tucson, AZ, I had no idea I would soon hold this place in such derision...and, with such contempt.

I have always considered this city to be my adopted home. I lived here for six years and loved the place. I even made a return--for family reasons--in 2002. But, within the last six years or so, after careful observation, I've changed my opinion. It wasn't just what I saw here...but more what I saw in other places I've visited.

I've got a lot of problems with this "big city that thinks it's a small town", and its primary focus of--itself. Let's start off with something simple...the coverage of the University of Arizona (UofA) athletic program, to the exclusion of most anything else sports- (or sometimes news-) noteworthy. There have been times when there was something HUGE going on in the REST of the world...but noooo, we have to watch the coverage on the 10pm news of the upcoming UofA NCAA Football season...in June. The Arizona Diamondbacks have just won a crucial game in extra innings against a popular division rival...the Detroit Red Wings have won the NHL's Stanley Cup...but none of that matters. Wouldn't we rather see the UofA Women's Volleyball highlights?

It gets worse. If there is any connection between an athlete or celebrity and Tucson, you can damn well be sure we will know about it. If a player hits a home run in the World Series and by chance he attended Tucson's Sabino High School, don't be surprised if they don't interview his high school coach. And you didn't want to be here when the Mars Rover was launched...being as much of the work was done right here at the UofA. Believe me, I'm all for coverage of science and technology...but not to lead off the news ("the Rover moved three feet today, thanks to efforts by UofA scientists")...when the national story should be about, say, California falling into the ocean (oh, and "the UofA sent a science team to investigate the strange disappearance of the Golden State..."). Yeah, well I know...civic pride and all that. Well, huge cities like Los Angeles or Dallas seem to be able to strike a balance between local and national...and I've not seen it this bad (read: self-serving) anywhere else...and I've been all over, 10 times as many small towns as large cities. You would think that everything either starts here, ends up here, or passes through here along the way. A friend of mine and I have a typical joke about what that's like, a possible story on the Tucson news..."Lance Armstrong is on his way to winning his record seventh Tour de France. Armstrong once drove through Tucson, on Interstate 10, and stopped for fuel. The owner of that station remembers...."

Yeah yeah I made that up. But there's real, more scary examples.

Here's another thing I really dislike, with more substance than just my perception of its self-service: the mistrust and dislike Tucson has toward other communities...and the downright stubbornness of this town to change and/or improve. For one--the people that run this town are scared of freeways. Scared to death of them, apparently. it seems as if there is a strong fear this town will turn into a metropolis the size of Phoenix instantly, should any appear.

This is not a joke.

The city of Tucson has built several "highways" that have red lights on them...without these signals these would be something approaching "real" freeways. Well, we couldn't have that. Sooo...these roads have become a barely acceptable means of getting around. And the speed limit on these roads, which are steadfastly ignored as impractical by all but winter visitors, who actually take them seriously? Why, a breakneck 45 mph. Why would anyone want to drive faster than that, anyway? It was fast enough for our grandparents in 1930...it should be fast enough for us, by cracky.

Recently ADOT (the Arizona Department of Transportation) was forced to improve a freeway exchange on the only real freeway here and the one the city can't put red lights on, Interstate 10. The overhaul of this exchange was necessary, as it connects I-10 and I-19, which is the Interstate that goes into Mexico. The cloverleaf construction of the old interchange forced people to go 25 or 30 miles per hour through the exit, or much much slower when there was more traffic...vehicles backed up, there were accidents, it was a mess. With the new interchange, these problems are alleviated. It seems, after all, that there are some drivers--Communists and Socialists and liberals and snooty Eastern types and tourists and Foreigners and people from that Great Satan, Phoenix--that insist on driving faster than 45 miles per hour. Why, we should lock them all up!

As they were building the giant overpass that was the I-10 to I-19 exit ramp, there was a photo in the newspaper of it, with a headline...which was, "Looking A lot like L A". I am not making this part up. It was a simple Interstate exit overpass...one Interstate to another...two or three lanes one way, two or three lanes the other. Here it is: 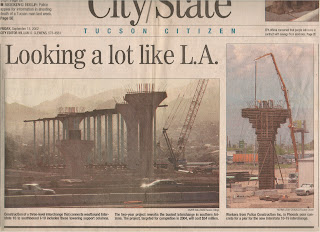 Special Notice to the City of Tucson: Listen up--CITIES DO NOT STAND STILL (as much as you might want them to)...like fish, THEY MOVE FORWARD OR THEY DIE.

Finally...well, for this entry, anyway...there was a study done here by the local newspaper, comparing Phoenix and Tucson. It was not popular. 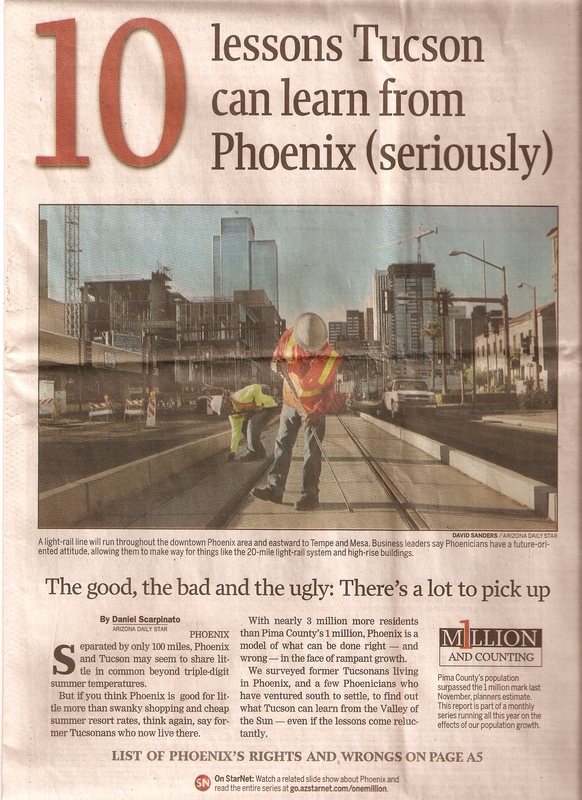 After considering all the economic, transportation and social factors...Phoenix won out easily over Tucson (although it was acknowledged that not everything is perfect there, either). Just another reason to believe Phoenix is the Great Satan, a big bully come to steal Tucson's lunch.

Phoenix cares nothing about any of that.

Phoenix knows that it cannot become Los Angeles...as unlike L A it carefully planned out its freeways 30-40 years ago, in preparation for its growth. While it admittedly might become huge, in the end it will at least be better organized.

Tucson has no plans for its growth...for example, there is no easy way to get from one end of the city to the other. An example of its poor planning: there is a parcel of land just to the west of Downtown, across I-10, in a historic district that has since fallen on hard times, and that has supposed to have been a number of things for years...a research park. A historical re-creation of Tucson centuries ago. An entertainment district. The city passed a Bond Initiative to gather funds for whatever it was going to do there. Well, discussions were held...and, finally, a decision was made. Only now, years later, the costs have outstripped the funds the City has been given by the voters. So...not enough money, no project, no action taken...the land sits.

Meanwhile, Phoenix has just completed its fabled Light Rail Project, initially connecting its Downtown to the East Valley cities of Tempe and Mesa...lessening its pollution problem and in the process continually finding new and novel ways to serve its citizens. (Said project is shown under construction in the photo, above.)

Oh, and did I mention? There's no traffic signals on any of the freeways in Phoenix. And, the speed limit on most of them is 65 MPH.

Oh, my. What is this world coming to?
Posted by James Anonymous at 8:06:00 PM
Email ThisBlogThis!Share to TwitterShare to FacebookShare to Pinterest

The Archive of James Anonymous

Welcome to the James Anonymous site.

Thank you for stopping, hopefully you will want to spend some time here.
The www.jamesanonymous.com website has been around since early 2004, and was originally featured on xanga.com. After several years offline I've resurrected it here.
A word on the site's structure: entries are listed in chronological order starting with the first, which appears at the start of the weblog. I've listed the original dates of posting as an aid to following the general narrative. The entry numbers are a general guideline and were originally intended to provide a sense of order, but sometimes don't appear in numerical order (some were started and then completed later on, some were revised).
Interaction is encouraged, and comments are welcomed. Such input often makes a better experience for all.
I hope you enjoy your time in my tiny part of the Internet.

James Anonymous
Phoenix, AZ, United States
In 2004 I came up with the idea of creating a weblog to share my thoughts, experiences, etc. I hoped to shield my identity, so I chose the pen name James Anonymous. (I did not then realize there are no such secrets on the Internet.) Soon the realization took hold, so instead of criticisms of the situations I found myself in, I starting relating stories--true tales of my (or others') experiences. Along with my thoughts and observations, this became the stuff of www.jamesanonymous.com (JA for short). Then its hosting site hit a rough patch, and it was no longer free. I had been a paid subscriber, but I had another blog then (broodcoffeetalk.wordpress.com) and had let it lapse. I didn't get the email notification that I had to upgrade or lose JA. I accepted the option to download its content so that I might keep it intact. I decided to resurrect it on Blogger, a site I'd heard good things about. After many hours of work, here you go--a new location for JA, with the same entries; and new ones on the way. "Stay close," I suggested at JA’s debut in 2004. Now, years later, I urge you do the same. Thanks for visiting.